Structure and dynamics in worship

Dynamism in worship is enormously important.

The “mainstream” worship 8 years ago was still cheerful, “wild”, spring songs, but that has changed. Many churches are still trying to push through these “wild” songs. They “urge” and animate the visitors with the first song to “jump along”. But this time is over, it may come back in the next 10 years. Resisting and holding on to other styles and songs can be dangerous. What we notice again and again at live gigs outside our church is that songs by Hillsong, Chris Tomlin etc., so well known artists, are better received than others. In addition, the young people know these songs by heart 😉

There is a very classical sequence of these songs: 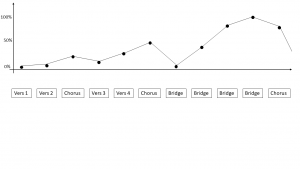 This sequence is typical for a modern worship song in the mainstream, perhaps sometimes there is a pre-chorus before the chorus.
In order to be able to convert this style optimally here is a performance curve, how should be increased. The typical Hillsong etc. Song starts quietly and gets more and more increased during the course of the song. Increased means that more and more instruments are added and play louder and louder until the climax of the piece. Here’s the graphic:

Verse 1: Quiet and 0%, means only piano and singing. Guitar is often not the right instrument for an intro (this too has changed in the last few years).
Verse 2: A slight increase, a few instruments are added, but only in the background. Towards the end of the verse the pitch is increased (louder more instruments).
Chorus: all instruments get in, much more full than the verses.
Verse 3: Most instruments are included, but quieter.
Verse 4: Instruments increase the whole verse.
Chorus: All instruments play along loudly, even a tick “wilder” than the first chorus.
Bridge 1: Vocals and piano only
Bridge 2: All instruments are added quietly and increasing the volume.
Bridge 3: Everybody plays “fat” and the drums keep increasing.
Bridge 4: 100% of the band (drums full on the crashes)
Chorus 3: Drums play “normal” rhythm again, but still “fat”, then outro quiet.

With us in the band it became the saying of the worship instructor (who communicates with the band without the other one getting it) “everything out now”, or “100%”. When the band doesn’t give everything at the climax of the song, for example when the drums don’t hit the crashes. These typical songs have an enormous power when the band is full and gives everything as a team.

Qualitatively good, but no power

Often very good quality bands with great musicians do not play out the highlights of the songs 100%. In German, “they don’t hit it.” Even if you play in a band of a quieter and more conservative community, please dare a little more. Believe me, it won’t be badly received. Especially the bridges are often underestimated and at 90% the chorus is played again. The bridge is a special part in a piece, if the band plays it to its full potential and brings 100%, then this part almost always has the most power in a song and many will start jumping 😉.

Here is an example of my band, No Longer Slaves